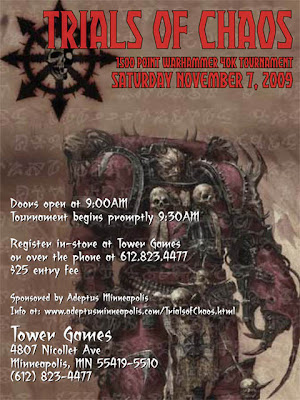 This past Friday I competed in my first 40k Tournament. It was hosted by Adeptus Minneapolis and played at my local shop Tower Games. In a field of 20 the competition looked stiff.

Almost every army was fully painted some of them amazingly so. There is a display case in shop that has two Slayer sword winning models and a number of golden Daemon winning models as a sign of the level of painting you may see at any time.

Game 1 Slaanesh - CSM vs. Tau 1500pts
6 objectives pitched battle.
You place your three objectives in the opponents deployment zone and he yours. 5 bonus points if you hold all three of the objective you place.

No deepstrike, reserves, outflank... everything start on the board first turn. If it is a daemon it has to Daemon strike in your deployment zone. No Steeling the Int. and EVERYTHING gets an extra D6 movement due to Low Grave.

Deployment:
I place three objectives on his side in a Triangle as close as posable to each other and the back of the board. He placed his spread evenly across my Deployment zone.

I start with two Oblits on the far Right of my zone with a clear line of Sight of all three of the Objectives he placed.

On the Left I have my Defiler, Two Oblits, 5 Termies 3 w/ LC 1 w/ Combi-Melta and 1 w/ HFlamer and PF and Icon of Khorne
with Two Rhinos of KB 1 with Kharn.

My plan is to rush the three objective markers I placed and kill everything holding them and count on the leadership reduction each turn to really hurt the Tau.

He places Two Hammerhead in his deployment zone and the spreads out two squads of Stealth suits and Fires Warriors in cover every where and Has like 20 Kroot with Hounds on my right side. There are models everywhere all getting cover saves.

Turn 1:
I go first and start moving up the left side all out. My oblits fire at his hammer Heads making there sight check and failing to pin. Other oblits drop PC templates and kill a few drones. Not a lot else

He Moves everything on the right up and with the extra D6 seems to only roll 6's FW and Kroot moving 12 inches. They open up and kill both of my Oblits on that side. He the shoots at my other side and wounds one oblit and start killing Terminators. After the smoke clears I have 2 Termies left.

Turn 2
My lesser Daemons arrive and I drop them on one of the objectives he placed in my DP zone and also in cover. They all pass their DT test. I keep moving up and shooting to minor success.

He starts shooting destroys a Rhino and my Defiler and starts shooting at the KB that got out. Then moves a wall of FW up to block my advance. His Kroot get another 6 and move 12 more inchs and are now all the way down the right side and on an objective.

Turn 3
I get My greater Daemon who arrives via one on my Skull Champs blowing up and he steps out of the KB that no longer have a ride. He moves toward the Lesser D holding an Objective he is behind a hill so has complete cover. My remaining Rhino TS through his FW and moves to the objectives on his side of the board. I start shooting at his FW and they start falling. With the reduced leadership they fall back quickly. He thinks this is a mistake on my part because I can no longer assault them. I run my KB toward the objectives.

He spreads his kroot out over two of the back objectives. He fails his leadership on the regroup and the FW run off the board his leader was part of this group. he moves up to get max fire on everything I have and kills all but on of my KB on foot and finishes off all but one oblits and 3 and 4 against my Rhino. He start to Shoot at my Lesser Daemon with his Kroot and they go to ground he still kills four of them with a 3+ cover.

Turn 4
Kharn and KB get out of Rhino Kharn splits from squad and charges a large group of FW the other KB attack a group of Stealth Suits. They kill everything! My Oblit blows up a Hammerhead and my PF from my KB get the other on the Assault of the Stealth Suits. I charge my Greater Daemon out to block the advance of the Kroot toward the third objective.

His kroot kill the Greater Daemon with a hail of gun fire he moves his remaining FW and Stealth suits up to shoot at KB.

Turn 5
I kill everything he has left on his side and hold two objectives there and one on my side.

He stretches out his remaining squad of Kroot who are holding two objectives and is going to shoot at the last lesser and force a Draw as time has told us this will be the last turn. He wounds me five times with Rapid Fire and I go to Ground and make all Five 3+ Cover Saves for the win. We roll the dice and it is a 2 the game would have ended no matter what.

I score 19 out of 25 points pretty good for my first Tournament battle ever.


MVP
Lesser Daemon went to ground and saved the day. Also placing the objectives so close to the back of the board. It made his troops likely to run off the board from just being shot at due to the leadership reduction.
Posted by Ash at 9:51 AM